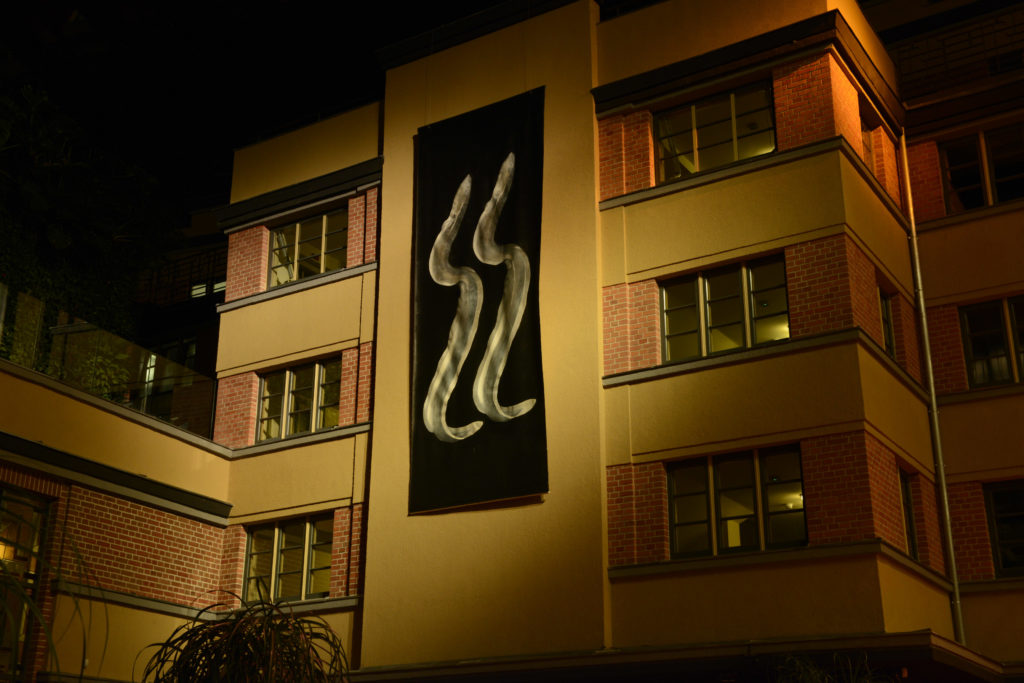 “The Tin Drum” is the story of a boy who – rebelling against the reality of adults – at the age of three decides not to grow up. Gunter Grass himself, at the age of fifteen, escaped from home and tried to enlist in the army – without success. It was not until two years later that he was drafted into the army, and at the end of his life he confessed that he was a Waffen-SS soldier. The disclosure of this fact caused a lot of controversy around the world, but the mitigating circumstances were the young age of the writer and his subsequent merits for German and world culture. Baśnik’s two symmetrical eels, painted in the format of a vertical rectangle, resemble the SS flag and directly correspond with the poster of the performance, depicting a child’s windmill disturbingly similar to the swastika.

The scene of catching eels – both described in the book by Grass and shown in the later, Oscar-winning film directed by Schlondorff – is as fascinating and memorable as it is repulsive. The head of a horse, wrenched out by a fisherman on the shore of a Baltic beach, whose mouth, nostrils and ears reveal eels feeding on the carcass, can be interpreted in many ways. An allegory of an impending catastrophe is being made of it: a worm penetrating once healthy tissue (a reference to the growing fascism), but also poverty, collapse, the inevitable end of a certain world. Perspective of a child who does not want to grow up, a child of many cultures (mother of the protagonist is Kashubian, his father is German, uncle and also mother’s lover is Polish, while the beach scene is still taking place in the free city of Gdansk), only completes the atmosphere of tearing, confusion and lack of belonging. After all, how to find one’s place in the world that has gone crazy? In a world that turns against itself.